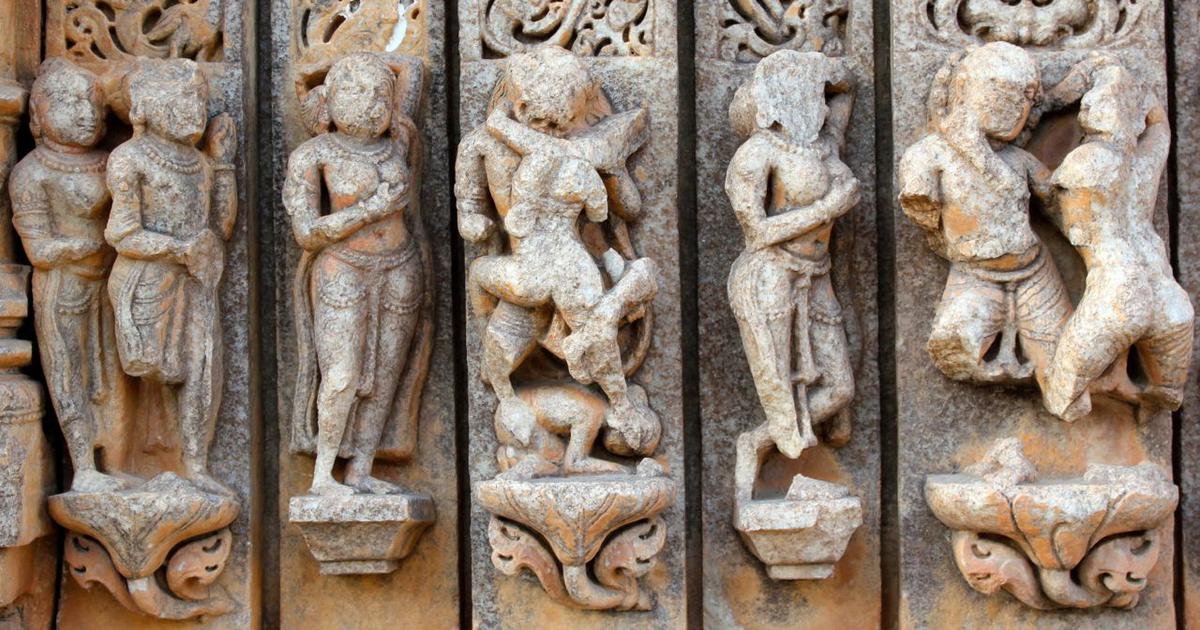 Sharma-ji was itching to talk about what was uppermost in his mind. At the first opportunity, he asked if we could suggest a suitable boy for Avanti. Both his wife and daughter were embarrassed but they were resigned to his coarse ways.

"Avanti is still young, what's the hurry?" asked my mother.

With self-important gravity, Sharma-ji rose to his full height, like a doctor proclaiming a diagnosis, and explained that the problem lay in an inherent conflict between the biological and social nature of women. Quoting Manu, he asserted, "Every woman desires every man she sees."

It is not her fault, of course; it is her stri-svabhava, "biological nature", and it has to be tamed and controlled by stri-dharma, her "duty to her family and society". So, she must marry as soon as she attains puberty. An unmarried woman has to be chaste; a married woman has to be faithful and produce sons, according to the dharma texts.

Avanti was discomfited by this talk; my mother looked at my father sceptically; but I was fascinated. Sharma-ji was not to be stopped. It is not a woman's fault, he said, if her innate nature makes her fickle and untrustworthy. The men of the house must protect her from her inborn sensuality and ensure that stri-dharma, her paternal heritage, triumphs over her demoniac stri-svabhava, her maternal heritage.

My mother was not amused. "Where is the evidence about women's 'untamed nature'?" she protested. Both Sharma-ji's wife and Avanti detected my mother's discomfort over these remarks. And before Sharma-ji could reply, mother and daughter got up to leave. As they were going out of the door, Mrs Sharma put her arm around me affectionately and called me "Amar, the immortal one". Sharma-ji turned to my father and congratulated him for having successfully discharged his obligation to the gods by producing a son.

After our neighbours were gone, my mother gave a distasteful look. "What an uncouth neighbour we have got!"

"Fortunately, his wife and daughter make up for him," I said, consoling her gently.

When Avanti skipped into our lives, I did not imagine that it would set the stage for the next phase in my kama education.

I learnt something about my mother too. Having grown up on a diet of Jane Austen, George Eliot, Thomas Hardy and other English novelists at college in Lahore, she had a modern mind and was deeply opposed to patriarchy. She and my father had a relationship of reasonable equality, although she wished secretly that she had continued to work after marriage. What she missed even more was a rich emotional and intellectual life with her husband.

This was due, perhaps, to their different temperaments – he was unworldly and she was worldly. Despite her education in English literature, however, I would discover that while she was modern in certain ways, she was not modern enough to believe in what we Indians call "love marriage". But of that, more later.

Avanti's father's obsession to get Avanti married introduced me to the grand compromise in history between the kama pessimists and optimists, creating a legitimate middle ground for desire that is sanctioned by society, religion and law. Sharma-ji's views about the inequality of men and women initiated me to the deep patriarchal prejudices within our culture and my "modern" mother's condescending response to Sharma-ji was my first encounter with feminism.

I grew up believing that men and women were mostly equal. Although my mother and father did not share their inner lives, they seemed to have a relationship of reasonable equality. In fact, my mother was stronger than my father; my grandmother was even tougher. And in my own generation, Isha and Avanti had minds of their own. Come to think of it, many Indian women, beginning with the Vedas, were emancipated in their own way.

To begin with, Indrani, the wife of the king of gods, seems to have had a fair degree of autonomy, going by the sexually explicit dialogue between her, Indra and Vrishakapi. The same goes for the women in my favourite epic, the Mahabharata – Draupadi, Kunti, Gandhari, Satyavati were all sturdier than their men. Hence, I wonder if the stereotype of the submissive, long-suffering Indian female – Sita and Savitri – is a myth propagated by the dharma texts in order to keep women in line.

You can always find an alternative tradition in Hinduism to the orthodox one.

A bhakti sect called Radhavallabh Sampradaya in Vrindavan raised Radha above Krishna as the supreme deity. The standard greeting among its devotees is not "Jai Krishna" but "Jai Radhe"! Like other Vaishnava sects, they were inspired by Jayadeva's Gitagovinda of the twelfth century, in which the great god Krishna falls in love with a married woman, Radha, and even implores her to place her feet on his forehead.

Contrary to this, I gradually became aware that while men and women are biologically unequal, societies around the world have institutionalised this insidiously into an inequality of power – that is, patriarchy. Because women were supposedly weak, they had to be guarded. Since no man could guard a woman all the time, Sharma-ji believed that she had to learn to guard herself by controlling her thoughts, feelings and acts. That is why Brahminical culture created inspiring stories to teach a woman her stri-dharma.

One of these was of Sambula, a lovely princess who married the heir apparent of a vast kingdom. Unfortunately, he contracted leprosy and decided to renounce the throne and live as an ascetic in the jungles. Everyone at the court was relieved at this decision, including his parents and his wives, as his open sores had become foul and rotten. Sambula insisted, however, on accompanying her husband and they built a hut by the river.

Sambula rose each morning, and then bathed her husband's leprous skin with cool water, and left to gather fruits and vegetables for their lunch. One day deep in the forest she came upon an inviting pool inside a cave and decided to bathe. As she stepped into the water, her radiance lit up the forest. A demon saw her and made advances. Sambula struggled and cried out for help. The ogre threatened to eat her. The god Sakka, however, heard her cries. After rescuing her, he explained that it was not he who had saved her but cosmic dharma – her own accumulated virtuous deeds over many lives.

When she returned to her leprous husband, he grew suspicious. He did not believe her story and spoke instead about the deceits of women. The desperate Sambula cried, "Oh, my husband, how can I convince you of my devotion!" In the end, she decided to perform an "act of truth". During a religious ritual, she proclaimed, "I have never held anyone dearer than my husband. If I speak the truth, his disease will be cured." She poured water over his diseased skin, and sure enough, his sores were washed away.

Cured, the prince returned to his kingdom. Eventually, he became king and his father retired to a life of quietude. Gradually, the young ruler was attracted to other women at the court, some of whom he married. Sambula and her sacrifices were forgotten. When the old king heard of Sambula's plight, he returned to the palace and reprimanded his son, saying, "You have a virtuous wife. Treat her with dharma." The son was ashamed, fell at Sambula's feet in apology, and from that day rendered her the honour she deserved.

Classical Sanskrit literature is filled with such stories. Manu, the lawmaker, says men of the house must guard their women from their "innate" addiction to sensual enjoyment. Otherwise, they will bring sorrow both to their own and their husband's family. It is a husband's responsibility, in particular, as he is vulnerable to the loss of his progeny through the infidelity of his wife.

Sambula's tale is a fascinating variant of Sita's in the Ramayana. Both women accompanied their husbands to the forest; both were objects of lust for demons; both aroused suspicion about their fidelity; in the end, the virtuous character of both women saved them. The dharma texts created a social code and an ideal of stri-dharma that conditioned women to accept a subordinate place in a patriarchal society. These stories helped them to internalise this ideal Hindu womanhood, such that they "voluntarily" aspired to it. It was all very cleverly done, according to the feminists.

Excerpted with permission from Kama: The Riddle of Desire, Gurcharan Das, Allen Lane.