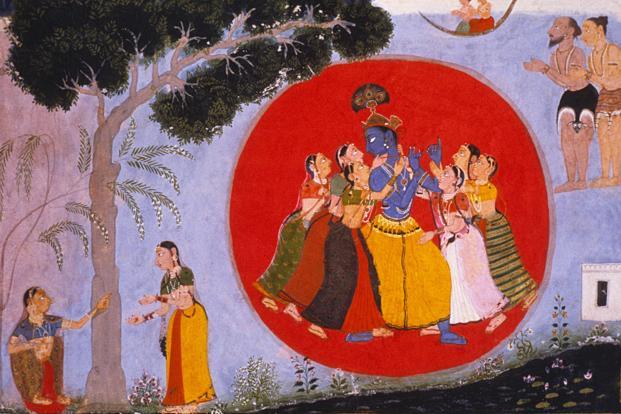 Pleasure and desire, in contemporary India, are contentious subjects. The rights of the citizens to indulge their appetites, for food or love, are being curtailed by the state and the judiciary. Gurcharan Das' latest book, Kama: The Riddle Of Desire, is pertinent reading in this context. Going back to ancient India and further, to the cosmic spheres, it revisits philosophies, mythologies and cultures of love. The third of a trilogy that began with India Unbound , focusing on artha, or material well-being, followed by The Difficulty Of Being Good, which explored dharma, or moral well-being, Kama is unique in that it is written as a fictional memoir, with Amar, the protagonist, telling the story of his desires in the first person. In the edited excerpt below, we learn of his early brush with kama, via a ganja-smoking pandit his grandmother revered:

Like most Indian boys, I grew up on stories of the gods Rama and Krishna, both avatars of Vishnu. Rama's is a story of conjugal love in which dharma triumphs over kama. But the pandit preferred Krishna's tales of illicit love. He told us how Krishna has an open love affair with Radha, a married woman. During raas leela, he dances with thousands of gopis and gives pleasure to each one. Eventually, he becomes the king of Dwarka and marries 16,108 women.

Not surprisingly, I grew up confused between the pure, austere Sita and the fun-loving Radha. While Sita is Rama's wife, Radha is Krishna's love; Sita embodies chastity, Radha sensuality; Sita is a queen, Radha is a milkmaid. Sita signifies the legitimacy of marriage, Radha denotes illegitimacy—her lover may be a god but she is a married woman; Sita's is happy monogamy, Radha's is romantic, illicit love. And so, I came of age admiring Sita but loving Radha. In my ganja pandit's stories, Radha always got more attention and ever since I have tended to lean towards her....

As I grew older, I came to appreciate the idea that the creation of the universe might have been an involuntary act which may have unfolded without a plan. It sat well with my modern, scientific world view and is not inconsistent with the old Indian idea of primordial desire creating the cosmos or the idea of divine leela. It makes sense to me that kama is a creative power, the chief motive behind the flowering of phenomenal life on earth. The split of the cosmic being helped me to understand the Jungian idea that a man carries female traits in his makeup—his 'inner feminine'—just as a woman has male characteristics. It explains why the seemingly rigid differences between male and female appear to fall away in the union of love. Kama's blind energy seems to me a natural urge to restore us to the original state of oneness which had been split into male and female. Brahma's primordial attraction for his daughter, Sandhya, has made me aware of a primal incestuous tendency in human beings. The poet had called her Sandhya, 'dusk', which is neither day nor night, but a threshold between the conscious and the unconscious, when man and woman encounter each other for the first time in a moment of confusion in the archetype of seduction. It also seems logical to my scientific mind that where sex is the basis of procreation, the multiplication of species had to be incestuous in the beginning.

Above all, my grandmother's ganja pandit seeded in me an optimistic attitude towards kama. This happy outlook flourished within the Indian civilization, elevating desire to a purushartha, 'aim of life', along with the other goals of dharma (moral well-being), artha (material well-being) and moksha (spiritual well-being). That a sense-intoxicating emotion could be promoted to the status of a lofty deity says something about a culture. So also is the notion of a playful, mischievous god who creates the world for no other reason than the sheer joy of the sport. On hearing Krishna's flute, the women of Vrindavan would sneak out of their homes into the forest, where they danced the raas leela in a circle with their lover-god through the entire Brahma night which lasted for 4.5 billion years. Krishna multiplied himself so that each believed that they were dancing exclusively with him.

The ganja pandit brought a corrective to the Victorian attitudes that I acquired at my Christian missionary school. Thanks to him, I was more relaxed when it came to physical desire, unlike most of my schoolmates. I sometimes wonder if they went on to make a trade-off in later life, sublimating the natural desire for another human being into a desire for 'things' and 'objects'. Is it possible to argue that the ubiquitous desire for 'shopping', which originated during the industrial revolution in the West and which has now swept the world, might originally have been a subliminal response to the ignominy associated with sexuality in the Judaeo Christian tradition? Certainly, the middle class that came up under British influence in India and has continued to flourish in post-Independence India, had internalized these prudish Victorian attitudes. Of course, after the sexual liberation in the twentieth century, these attitudes have changed dramatically in the West and are going through a similar process in the rest of the world.

Excerpted from Kama: The Riddle Of Desire by Gurcharan Das with permission from Penguin Random House India.