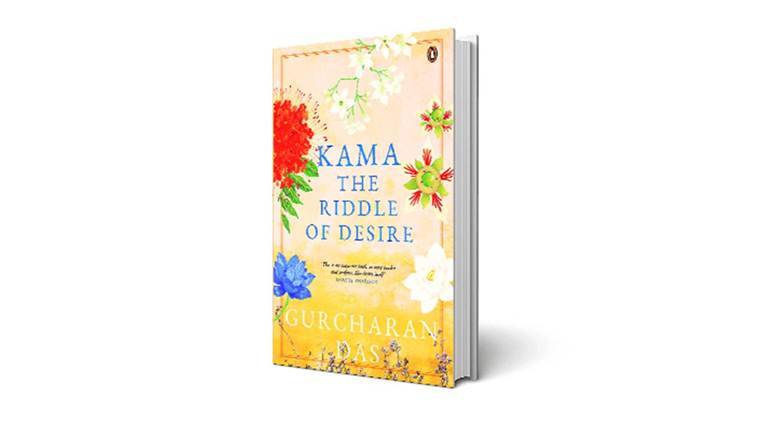 Read against the background of the ongoing battle between the sexes there is something infinitely soothing about Gurcharan Das's scholarly ruminations on the theme of desire.

The more elegant term of course is Kama or passion, the title of his book. That would of course tilt it into Mills and Boons territory of heaving bosoms and tormented male yearning. Every now and then it's difficult not to imagine that the book is the result of a one-night stand between Stormy Daniels and Nirad Chaudhuri, the current day siren and the mighty midget savant of the 20th century.

The subtitle is more to the point. It underlines Das's credentials — the book jacket refers to him as a 'public intellectual' by which we may suppose that he is meant to be regarded as a profoundly ambitious thinker.

His book on the theme of memory and human desire is part of a trilogy. After serious explorations of Indian thought on the subject of Artha (material well-being); Dharma, (moral well-being); he now turns his attention to Kama — the riddle of desire (emotional well-being). What he appears to underline is not any given set of beliefs, or rituals based on beliefs, but what constitutes the search, or quest that an individual undertakes if he or she happens to be a sentient being or one 'deserving of desire' as Das puts it.

In Peter Brooks staging of the Mahabharata there is a moment when Arjuna seeks to know the meaning of life from Krishna, just as the battle is about to begin. Arjuna leans forward. The desire is for truth. In later years this exposition will be known as the Bhagavad Gita . On stage, all that Arjuna hears is the haunting sound of a flute being played. Words, notes, images of a myriad lives rush past in that moment as Krishna's Lila begins its enchantment.

In some ways, Das has created this sense of enchantment. He uses memory as a device to summon the many forms of desire that have played upon the mind of Amar the young man whose memoir forms the text of his search for love. Set as it is against the background of the crumbling of the old order of society following the trauma of Partition when his parents arrive as refugees at New Delhi with their young son, Amar could also be seen as a Midnight's child.

Certainly, the self-referential hero Amar Kumar who tells us of his lives and loves, with an emphasis on the latter, is what the French call "L'homme Moyen Sensuel" or your average bloke. He is deliriously and indeed exuberantly tormented by the slings and arrows of passion. At the same time, we are led to believe that there is another deeper side to him.

Every now and then he steps out of the 'Sturm und Drang' of his self-gratification to reflect on how poets and philosophers, the wisdom of the East as contained in the precepts of Vedic couplets, or Buddhist theology, or Vatsyayana's amazingly up-to-date recommendations, interspersed with Freudian insights, have viewed those moments that come under the term Kama.

The idea of love

Though it will seem almost crude to reduce Das's subtle delineation of the power of Kama into the binaries of Kama optimists and Kama pessimists, terms that he also uses, it offers an easy way to describe Amar's situation in the book. It's partly a novel tracing the trajectory of his life as a young man eternally seeking love, or as one of the chapters suggests in love with the idea of love.

On the opposite side, each encounter with the three main women in his life, the upper class Isha, (Artha), the middle-class Avanti, (Dharma) the intellectual Amaya (Kama) allows Amar, or his inner Gurcharan Das to point out the lessons that can be learnt by and through these phantoms.

When Amar moves to Bombay, now of course Mumbai, the scene shifts to the verandah of the Bombay Gymkhana Club and his terraced flat in Colaba. There are deliciously provocative references to known persons of that era, Mulk Raj Anand and Dolly Sahair for instance. They mark the transition from the feudal bureaucratic stodginess of New Delhi to the lighter meritocracy of Mumbai.

It allows Amar to flit between his various Kama traps while annotating them with passages from Proust, Flaubert, Austen, Tolstoy and Shakespeare as well as Sanskrit poets and poetesses. When he is in deep distress, he always has recourse to go and gaze upon the stone statue of a goddess from Mathura at the National Museum and the golden age of the Guptas.

Perhaps it's not just Kama that enthralls Amar/ Gurcharan, but beauty. Towards the end he tells us: "Like Proust, Abhinavagupta, the tenth century philosopher believed that memory is not simply remembering past impressions but entails insights into the past by entering an imagined world of beauty."

In evoking those moments of beauty in a lifetime of memories Gurcharan Das is a poet-philosopher to be cherished.